The control users get in mediated environments is illusory, overwhelming, and myopic. Lawmakers and companies should pursue more direct values like trust, obscurity, and autonomy. They should embrace more direct strategies like mandatory deletion, collection and purpose limitations, and non-waivable duties of care, loyalty, discretion.

Woodrow Hartzog is a Professor of Law and Computer Science at Northeastern University School of Law and the Khoury College of Computer Sciences. He is also a Faculty Associate at the Berkman Klein Center for Internet & Society at Harvard University, a Non-resident Fellow at The Cordell Institute for Policy in Medicine & Law at Washington University, and an Affiliate Scholar at the Center for Internet and Society at Stanford Law School. His research on privacy, media, and robotics has been published in scholarly publications such as the Yale Law Journal, Columbia Law Review, and California Law Review and popular publications such as The New York Times, The Washington Post, and The Guardian. He has testified multiple times before Congress and has been quoted or referenced in numerous articles and broadcasts, including NPR, BBC, and The Wall Street Journal. He is the author of Privacy’s Blueprint: The Battle to Control the Design of New Technologies, published in 2018 by Harvard University Press. 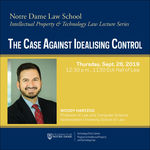